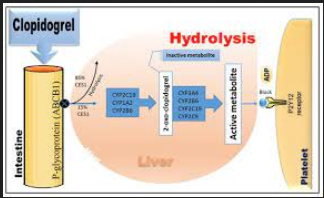 Background: Coronary heart disease (CHD) so known coronary artery disease (CAD) where is result from hindrance of blood transit to muscle of heart cause to collect the lipid and cholesterol on the inner wall of the heart. Because of atherosclerosis. smoking, obesity, dyslipidemia, hypertension and diabetes mellitus. Percutaneous Coronary Intervention (PCI) is a non-surgical operation performed using a catheter (tube is flexible and thin) to cram either  inflate a balloon in the narrowing place or stent (a very small and fin grid tube is made of either plastic or metal of stainless steel). Galectin-3, the chimaera category in the family of galectins, Galectin-3 among the galectins family contains glycin, tyrosine, and proline, which are necessary for the galectin‐3 biological activity, which are rich N-end addition to the domain of carbohydrate-recognition where they can formula oligomers. LGALS3 is the coding gene of galectin-3, which is sited on chromosome 14 (arm q between 21-22). A current study has shown that LGALS3 gene single nucleotide polymorphisms (SNPs) (rs1009977), SNP can occur in the genome coding (gene) and so single nucleotide variation (SNV) may be associated with changes in protein levels or affect response to a drug.

Subjects: A hundred individuals in the present work were divided into two main groups, the first included 70 patients their age ranged between 30-66 years with MI who underwent to elective PCI (30 of them underwent for the firstly time elective PCI, and the remained number underwent for more than one). The second group involved 30 healthy individuals with the age range 30-55 years were enrolled in the present study as a control group. Sandwich-ELISA technique was applied for measurement Gal–3 concentration in the sera samples. Genotyping Study included Extraction of DNA where blood sample of the study groups which were collected in EDTA tubes and frozen, was subjected to Quick-DNA™ Blood MiniPrep Catalog numbers D3024 and D3025. Electrophoresis of DNA, Performing Reverse Transcription Polymerase Chain Reaction, Study the Sequencing of SNP (rs1009977) in the LGALS3 Gene, Sequencing and Sequence Alignment, the PCR products were separated on a 2% agarose gel electrophoresis and visualized by exposure to UV light (302 nm) after ethidium bromide staining.

Results: After the DNA extraction process, the efficiency of the extraction process was evaluated by estimating the purity and concentration of the DNA, on the basis of which the subsequent operations were continued in order to continue the sequencing process. Also showed that TT genotype is less likely to be affected for treatment by clopidogrel (OR=0.814 at p=0.683) while TG genotype revealed the most affected by treatment with clopidogrel (OR=1.166 at p=0.725) and GG is not affected (OR=1 at p=1), when chi-square value was 0.571 (p=0.751) for comparison of the two main groups, while allele frequency% was (OR=0.926 at p=0.804) for T and G, while shows the recessive genotype results for two study groups, it was found that OR=1 at p=1, while dominant genotype results was OR=0.814 at p=0.638, in addition to that, the co-dominant genotype result show OR=0.814 at p=0.683 for TT genotype, OR=1.166 at p=0.725 for GT genotype and OR=1 at p=1 to GG genotype. The additive genotype result illustrated the value of OR was 0.964 at p=0.945 for 2TT+TG and OR=1.214  at p=0.690 to 2GG+TG genotypes; respectively. After alignment of product amplification of the LGALS3 gene, the results are five samples with 100% concordance of two healthy subjects, two patients with one PCI and one patient with multiple PCI, so five samples have a 99% concordance of two healthy subjects, two patients with one PCI; and one patient with multiple PCI, three samples containing 98% for patients with. As shows that there are significant (p=0.000) increases in the galectin-3 levels in the MI patients group comparison to controls, for each genotypes of rs1009977 SNP. In addition to that, its observed that the highest level of galectin-3 was recorded in TG genotype for patients.